by A Guest Writer I’m always impressed by how well our client, Stacia Guzzo of Handcrafted HoneyBee and SmartyPits, knows her audience. She recently shared this story about the evolution of her trade show booth, and I wanted to share it with you!  –Arianne

There are times in life when new things feel exceptionally scary.

Sometimes the new things are small: a new schedule. A different teacher. A new pet.

Sometimes the things are much bigger: a move to a totally new location. A new job. Starting college (or your child leaving for college). A choice for sobriety. A new baby.

A shift into new territory comes with a bit of discomfort, no matter how good it is in the larger picture of our lives.

Back in January, I experienced that very discomfort from a new experience—and the implications on our lives as business owners have been significant. I exhibited at my very first trade show. And I felt so, so small.

If you’re unfamiliar with what a trade show might be, imagine it as a gigantic, temporary candy shop for store owners. It’s a place where hundreds (sometimes thousands!) of businesses, large and small, put their best foot forward. Everyone’s goal is the same: entice buyers from boutiques and big box retailers alike to consider selling their products.

On a cold, rainy morning six months ago, I set up a small booth at the Las Vegas Market and hoped that the buyers who walked by would see all of the love, sweat, and time poured into our microbusiness. I planned our booth for weeks ahead of time—I bought new furniture, painted props, and designed catalogs.

It was intimidating to watch people come by, look us over, and consider and what we had to offer.

At the time, I had wanted our booth to look PERFECT for that first show so we could get into as many new stores as possible. In retrospect… it didn’t look bad. But compared to many other talented artists around us, it didn’t necessarily stand out as stunning.

I learned lessons throughout that first trade show—things I never could have known without actually doing it—about what worked and what didn’t. I learned about what translated well and what was confusing to buyers. I learned how much was too much and what I wished I had brought instead.

And afterward, even though I knew I would do a few things differently the next time, the scariness didn’t feel as scary anymore.

Improving a trade show booth design… one show at a time

So when we attended our next trade show a few months later, I gave it another try. Our next booth had a theme. We took a lot of time setting up, and we dove into the trade show hoping that our mission and message would come across more clearly.

This worked a little better—but again, I left feeling like there were things I could have done better. Robert and I took notes and thought of how we could improve our clarity and presentation.

And once again, the scariness diminished a bit.

Just a few weeks after that, I flew out to Dallas for a market show with our new sales rep group. SmartyPits was featured in their showroom, and they had professionally designed my space. All I had to do was come and tell my story as the maker!

I was floored by the booth they had created: 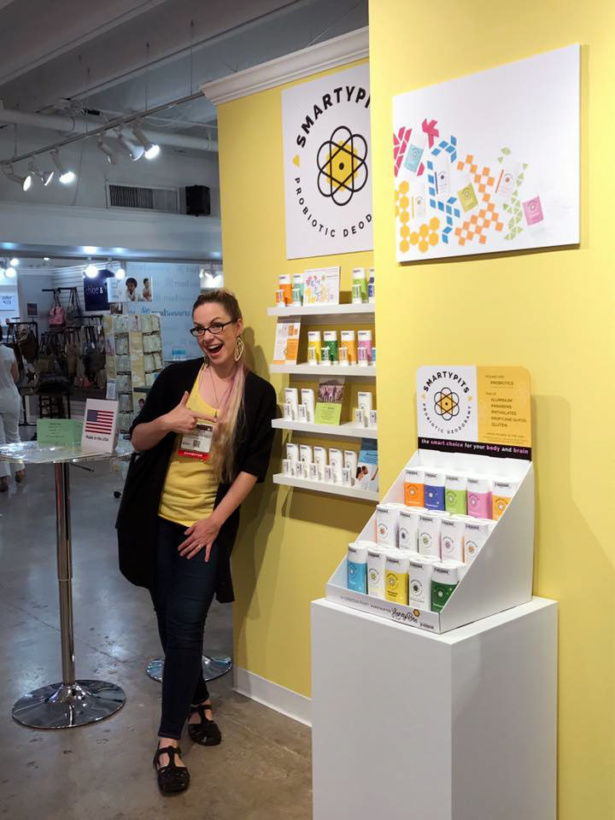 It was so simple. So effective. So… perfect. They had conveyed effectively what I had struggled to express in my prior booth designs.

I walked around the showroom while I was there and studied the other booths. What worked, visually? Why had they been able to make such a compelling booth, where I had struggled?

You can’t skip over the hard parts

For a little bit, I felt frustrated that I couldn’t create such a clear, clean, joyful design on my own at a trade show. It wasn’t for lack of passion!

But the reality was this: I needed each experience to learn a little bit more.

Isn’t that such a common human experience? We want to feel totally comfortable and at ease with a new thing from the very beginning—the new job, or parenthood, or fitting into the new school, or adapting to the new schedule.

We wish we could skip over the hard part: the learning.

The part where we figure out what works and what doesn’t. Where we face the things that fall flat. Where we realize that we need to work harder at the things which are working.

Learning is one of the bravest things we can do. The chance to learn is ten times more valuable than the outcome of immediate success.

The opportunity to learn—to try, to receive constructive criticism, to adapt, to be praised—make us more compassionate, more emotionally and mentally agile, and more open to possibility beyond what we expected.

And so this weekend, we’re back at the Las Vegas Market for the second time. I’ve taken what I learned over the last 6 months—the critiquing eyes, the helpful suggestions, the confusion, the ‘A-ha!’ moments, and the guidance in the sales rep showroom—and I’ve come back to try again.

I think this might be our best booth yet. I know there’s still plenty to learn. And I know that the design of a trade show booth isn’t, in the long run, that big of a deal.

But it’s significant to me, because it embodies a bigger lesson. It’s a lesson we all learn, again and again, and it’s a good one.

It’s the lesson that my best self is still out there, and that tomorrow I will get another chance to try to be that best self, from the knowledge I gained every day prior.

Learn how we helped transform Handcrafted HoneyBee into the mighty business they are now.

You can get past this awkward teenage stage for any aspect of your business by hiring design help. Contact us to talk about creating a beautiful, cohesive brand for your business! Business Advice: How to Focus When You’re Almost Burnt Out How to Plan For Retail Sales During an Uncertain Holiday Season